Augmenta is able to recognize and track targets by analyzing the contrast based features of the target that are visible to camera. You can improve the performance of a target by improving the visibility of these features through adjustments to the target’s design, it’s rendering and scale, and how it’s printed.

You can also improve detection and tracking performance by controlling the focus mode of the device camera and designing your app’s user experience to obtain the best image of the target.

Review these tips and practices to understand how to affect these variables and achieve the best possible performance for your Augmenta campaigns.

Image Targets are detected based on natural features that are extracted from the target image and then compared at run time with features in the live camera image. The rating of a target ranges between 1 and 5; although targets with low rating (1 or 2) can usually detect and track well. For best results, you should aim for targets with 4 or 5. To create a target that is accurately detected, you should use images that are:

The quality of the tracking using Augmenta can degrade significantly when the printed targets are not flat. When designing the physical printouts, game boards, play pieces, try to ensure that the targets do not bend, coil up, and are not creased or wrinkled. A simple trick is to use thick paper when printing, for example, 200-220 g/m². A more elegant solution is to get the printout foam core mounted on a 1/8” or 3/16” – 3 or 5 mm – thick board.

Printouts from modern laser printers might also be glossy. Under ambient lighting conditions a glossy surface is not a problem. But under certain angles some light sources, such as a lamp, window, or the sun, can create a glossy reflection that covers up large parts of the original texture of the printout. The reflection can create issues with tracking and detection, since this problem is very similar to partially occluding the target.

The target features will be harder to detect and tracking can also be less stable if you are looking at the target from a very steep angle, or your target appears very oblique with regard to the camera. When defining your use scenarios, keep in mind that a target facing the camera, whose normal is well aligned with the camera viewing direction, will have a better chance to get detected and tracked.

Attributes of an Ideal Image Target

Image Targets possessing the following attributes will enable the best detection and tracking performance from Augmenta. 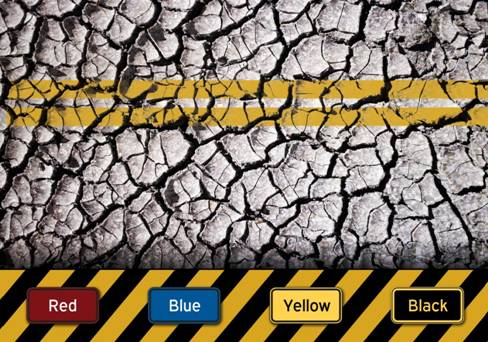 Figure A – Image target with coordinate axes for explanation. 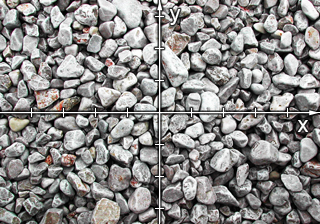 Figure B – Image showing the natural features that Augmenta uses to detect the image target. 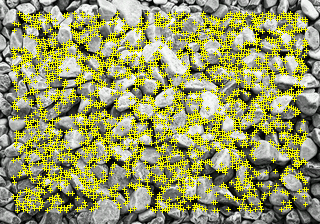 An augmentable rating defines how well an image can be detected and tracked using Augmenta. This rating is displayed in the Campaign Manager and returned for each uploaded target.

A feature is a sharp, spiked, chiseled detail in the image, such as the ones present in textured objects. The image analyzer represents features as small yellow crosses. Increase the number of these details in your image, and verify that the details create a non-repeating pattern.

The augementable rating on the Target Manager hints at the problem:

Good or bad local contrast is often difficult to detect with your eye. Improve the contrast of the image in general, or choose an image with details that are more edged. Organic shapes, round details, blurred, or highly-compressed images often do not provide enough richness in detail to be detected and tracked properly.

This artwork shows a more practical example of how to improve the local contrast of the target. We use an image with two layers. In the foreground are a few multi-colored leaves. The background is a textured surface. The layers exist only in our graphic editor; when uploading to the Target Manager we always use a flattened image, e.g., PNG format. The uploaded image is 512×512 pixels in size, a little bigger than the recommended minimum of 320 pixels. 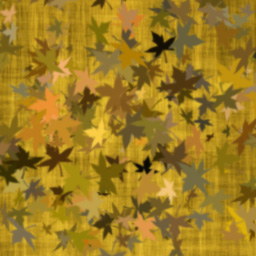 At first sight the original image might have enough detail to function as a target. Unfortunately, uploading it to the Target Manager yields a very low rating of only one star. This results in poor tracking performance. Consecutive improvements allow improving the target quality to a five-star target, yielding superior detection and tracking performance.

The more balanced the distribution of the features in the image, the better the image can be detected and tracked. Verify that the yellow crosses are well-distributed across the entire image. Consider cropping the image to remove any areas without features.

Typically, organic shapes with soft or round details containing blurred or highly compressed aspects do not provide enough detail to be detected and tracked properly or not at all. They suffer from low feature count.

Although some images contain enough features and good contrast, repetitive patterns hinder detection performance. For best results, choose an image without repeated motifs (even if rotated and scaled) or strong rotational symmetry. A checkerboard is an example of a repeated pattern that cannot be detected, since the 2×2 pairs of black and white squares look exactly the same and cannot be distinguished by the detector.

Improve the quality of the features by applying a local contrast enhancement operation on the image.

The procedure to apply this operation is fairly simple. In our example we use Photoshop, but any other graphic editor tool can be used:

The output is the image with enhanced contrast, identical to the Unsharp mask. The Unsharp mask comes from the analog print age, where they used a different image between the original and a blurred copy to add detail contrast. The ‘amount’ setting of the mask is 100% in this case; this is a weight on the difference.

The formula applied to the actual pixels is for each channel, where the precedence of the evaluation of the bracketed term is important:

How To Evaluate a Target Image in Grayscale

If the image has low overall contrast and the histogram of the image is narrow and spiky, it is not likely to be a good target image. These factors indicate that the image does not present many usable features. However if the histogram is wide and flat, this is a good first indication that the image contains a good distribution of useful features. Note though that this is not true in all cases, as demonstrated by the image in last row of this table.

How To Use the Feature Exclusion Buffer

A features-exclusion buffer surrounds the inset of an uploaded image. This buffer area is about 8% wide and it does not pick up any features, even if features do exist within that zone. See the first row of the following table, where the shaded area in red does not contain any features, even though visible features are present in this zone.

You can avoid this features-exclusion buffer situation by adding a white 8% buffer around the image for the Target Manager target generation, as is shown in the lower row of the table above. But consider that those features will be helpful only when it can be guaranteed that during the run time execution the target will lie on a surface with a unique color and does not, itself, have features.